Skin color: an example of adaptation to the environment, don't use a cosmetic to change

April 18, 2019
The evolution of humans is written on our skin. Beyond an identity signature, human skin color represents an example on how our species has been capable to adapt to different environments.

We are all aware of the damaging effects of the sun and know the importance of protecting our skin, the largest organ of the body, constituting 16% of the human body’s weight (Figure 1). Ultraviolet (UV) radiation that reaches the Earth surface and to which we are exposed is composed of a mixture of UVA, which can penetrate deeply into the dermis and is responsible for the skin ageing, by provoking oxidative damage to proteins, DNA and cell membranes, and UVB, which only reaches the epidermis (the outermost layer of the skin) as it is partially absorbed in the atmosphere. This type of radiation is the most damaging one, as it can produce DNA and cell damage, and is largely responsible for sunburns. Furthermore, the painful sunburns that can occur without an adequate protection are a determining factor for the posterior development of malignant cutaneous melanoma, the most dangerous skin cancer. 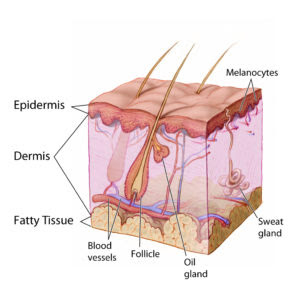 
But it is obvious that not everyone is affected by the damaging effects of the sun in the same way and that light-skinned people are more susceptible to radiation damage than dark-skinned ones. These differences are mainly due to the melanin, a pigment synthesized by melanocytes, large cells located in the basal layer of the epidermis. The melanin determines skin pigmentation level (it is responsible for tanning) and acts as a protective barrier.
Elucidating the evolutionary and genetic mechanisms that have allowed the darkening or lightening of the skin in humans has been the focus of many anthropologists, geneticists and evolutionary biologists over the last years. The world-wide distribution of human skin color is highly correlated with the intensity of incident UV radiation. Thus, in places where the irradiation is very high, darker colors have been favoured, while at higher latitudes, where the irradiation is lower, lighter skins are predominant (Figure 2). But, which evolutionary process has taken place? And more importantly, does it have any adaptive advantage for humans? 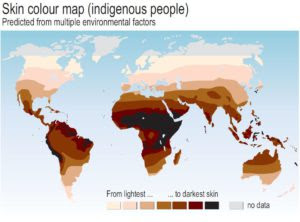 Higher primates, like chimpanzees, have a light skin covered by dark hair, with the ability to develop a tan on the exposed parts of their skin (hands and face). Thus, it is speculated that first hominids that appeared in Africa were also covered by hair like these primates. However, environmental conditions and higher activity levels associated with bipedalism made the loss of hair necessary for a proper thermoregulation of the body, leading to an unpigmented and unprotected skin in areas exposed to very intense solar radiation. In order to minimize the damaging effects of the radiation on the skin, like sunburns, cutaneous melanoma, or folate (an essential nutrient in foetal development) degradation, among others, natural selection would have favoured darker skins.

But around 100,000-60,000 years ago, humans migrated out of Africa and dispersed to other regions in higher latitudes, where the intensity of UV radiation was lower. So, what happened in these regions? Were darker skins still advantageous from an evolutionary point of view? The answer is no, as in environments where the solar radiation intensity is low, a dark skin prevents UV radiation to penetrate into the skin, which is required to catalyse the synthesis of Vitamin D. This is essential to promote a good mineralization of the bones and development of the skeleton, and insufficient levels of this vitamin can lead to serious health problems like rickets in children. Therefore, natural selection would have favoured mutations that led to the lightening of the skin. Remarkably, the depigmentation process happened in Europe and in Asia independently, this is, provoked by different genetic mutations.

Several genes and polymorphisms (variations in the genome) that are involved in the pigmentary process have been identified so far. However, pigmentation is a very complex trait and there is still much to be done until we are capable of fully understanding the genetic basis of human skin pigmentation and making inferences about how can this have an impact on the susceptibility to different diseases or pathologies.
The evolution of humans is written on our skin. Beyond an identity signature, human skin color represents an example on how our species has been capable to adapt to different environments. Either as a protection against melanoma, the degradation of folate, or deficient levels of vitamin D, pigmentation or depigmentation of the skin is undoubtedly an adaptive trait in the evolution of humans.
By Dr Saioa López, Postdoctoral Research Associate, University College London. SRUK London constituency.

Posted assuming that this helps people who sometime desperately try to change color of skin by using cosmetics or any other methods.

ecoplanet is leading brand of aromatherapy cosmetics made with pure, natural ingredients those are beneficial
You may download a catalogue at www.ecoplanetstore.com

Popular posts from this blog Workshop on aromatherapy for wellness & beauty
course will include following topics:

Bimal Das
I have been doing research in essential oils for wellness and beauty from year 2000. I think, I have extraordinary strong olfactory sense, which helps me to identify aroma components in complex matrix. I studied and researched healing properties of aroma or essential oils and strong believer in this science from experience and experiments. Doing research and developing science that delivers aromatherapy for wellness, cosmetics and food. I started www.ecoplanetstore.com which delivers safe, indigenous,cost effective cosmetics to spa, salon and clinics. Also retail products in amazon https://goo.gl/VsCB7F and flipkart https://goo.gl/DDACW1 Many international wellness chains started using our products. I also started school of aromatherapy science and technology to develop skill and propagate aromatherapy science to practice in life career. There is huge scope in this science to future research which can improve human living especially stress, mood and pain